When I'm in the mood for comfort food I usually go through my mental rolodex of Korean recipes.  Growing up being half Korean was amazing for a number of reasons, but one of the best reasons was definitely for the food.  My mom is an amazing cook and every Korean recipe I've learned is from watching her for countless hours in the kitchen.  One of my favorite and more easy recipes to make is kimchi jjigae (kimchi stew) which is made from the deliciously pickled and fermented cabbage Korea is known for. 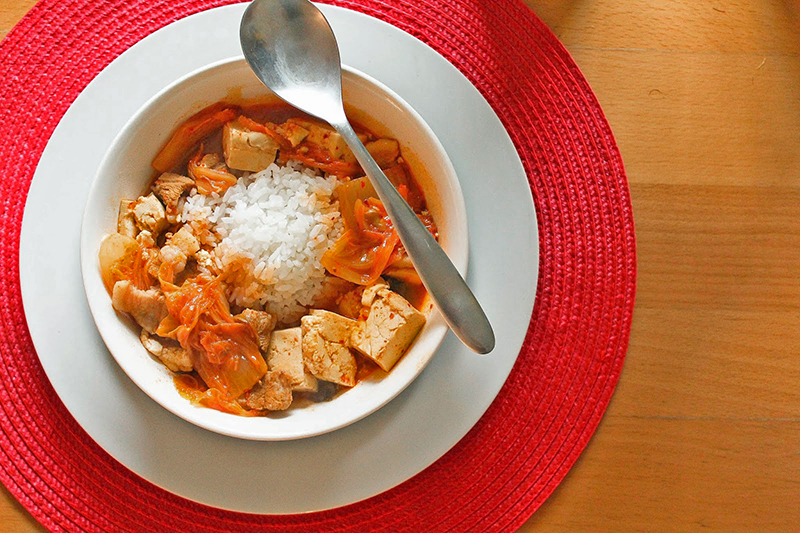 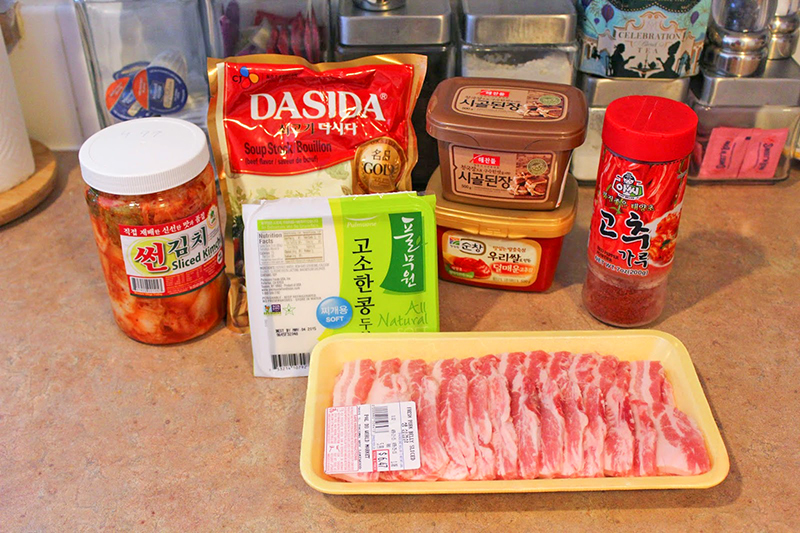 Instructions:
Combine kimchi and juice in a pot and fry over medium heat until the kimchi is heated through.
Add in pork belly, pepper flakes, pepper paste, bean paste and stir ingredients together.
Pour water over and add bouillon.
Boil ingredients for at least 20 minutes over medium-high heat, covered, stirring occasionally.
Add tofu and boil for another 5-10 minutes.
Serve over rice and enjoy! 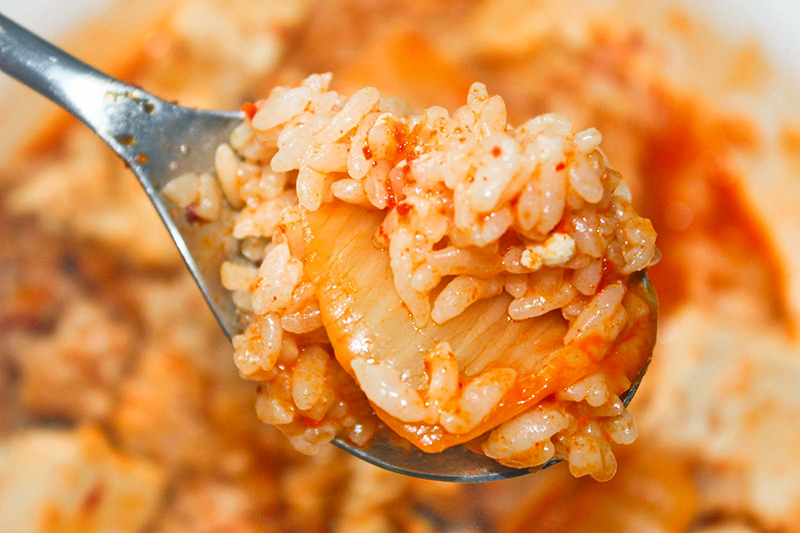 Let me know if you try this recipe or have any other favorite Korean recipes!

Earlier this month I reached my max accrual limit for vacation time at work, so I took a week off with the intention of having a staycation followed by a short trip to Disneyland this weekend. When the thought of a staycation first popped into my head a long list of ideas came to mind and with all the time in the world I thought execution would be simple and flawless. Plans included taking a weekend trip to my alma mater for my best friend's birthday/the homecoming football game, finishing decorating my new apartment, taking some autumn inspired outdoor photos, doing arts and crafts for the upcoming magical season of "Kristenmas," exploring my new city, finish reading The Girl on the Train so I can see the movie, starting blogging again, meal planning and recipe creating, and packing for Disneyland. Thus far, I have accomplished two of those nine things, and the two I have "completed" really aren't that complete.

Friday morning I was supposed to embark on my mini-roadtrip to Pullman (the town of my alma mater, home to the great Washington State University), but weather reports stated that the PNW was due for one of the largest storms in forty years, so as a safety precaution I opted to stay on this side of the mountains. With my weekend plans canceled, I started my staycation by successfully being a freeloafer at my dad's house from Thursday through Saturday. During those three days I bummed his cable, to catch up on my trashy reality television addiction, ate every meal at his house in an effort to not grocery shop before I take off this coming weekend to Disneyland, and spent a copious amount of time pinning everything from fashion inspiration to puppy pictures on Pinterest. I left my dad's house at 11:15 p.m. (after the WSU football game was done, we won if you care) on Saturday to meet my friend at a bar for some much needed drinks.

The bar was supposed to be somewhat lowkey and it really was going to be until a rather nice gentleman decided to purchase three rounds of shots for me and my friend, With the slight turn of events on Saturday night, I woke up Sunday morning feeling incredibly dehydrated and lazy so I spent the entire day on my sofa binge watching American Horror Story Hotel. I am somewhat proud and ashamed to say I completed the entire season in one sitting.

After my lazy day on Sunday, Monday I woke up with some motivation and decided to do some shopping for my home to complete my empty bar cart area and decorate my bland walls. During my shopping trip at HomeGoods I successfully purchased five pieces of art. I went on to go home to hang my art, stage my bar cart, and stock/organize my liquor. Just when I thought that all things were coming together, I realized that my main piece of art is too heavy and large to hang by myself so instead it is currently leaning against a wall in my entry way until my dad returns from his business trip and can come over to help me hang it. #singlewomanproblems

Tuesday, aka today/yesterday, morning I leisurely enjoyed breakfast and coffee accompanied by reading You Are a Badass - I know, it's not even the book I wanted to complete this week, really not sure what I was thinking there. Later that day I went on a date and stuffed my face with the most delicious orrecchiette dish and when I returned home nothing sounded better than retreating to my sofa and watching shows about food. My current tv show obsession is The Supersizers Go..., a British show featuring a male food critic and female writer who document a week living life in a different era with food being the primary focus. On Tuesday night, I happily retreated to my bed at 10 p.m. with every intention of going to sleep only to discover that my brain did not share the same idea. After nearly three hours of laying in bed wide awake I decided to write this blog post and accomplish another item on my staycation wishlist.

Wednesday and Thursday are now my only two days left to complete the other seven items on my list and considering the fact it is 1:28 a.m. on Wednesday morning, I don't see myself getting an early start on any one of those things, because eventually I would like to go back to bed bed and ideally sleep for at least six hours. If I fall asleep in the next 30 minutes I can wake up at 8 a.m. and use the morning to strategize the rest of my staycation and make the most of the time I have left away from work.

Tonight/this morning's thought provoking question is: does anyone actually have productive staycations where they accomplish everything they wanted to or do some things just inevitably get left by the wayside?

Favorite Shops on the Web